Hincapie Sportswear first launched in 2002, but the brand was two generations in the making. The story starts in the early 80s, when Rich and George Hincapie’s father introduced them to the sport he loved - cycling. Both boys began racing at the age of 8, and George quickly made a name for himself as a junior cyclist. He went on to join the professional ranks, competing 17 times in the Tour de France and winning three U.S. National Road Race Championships. Rich went the college route, also managing cycling events and eventually opening Hincapie Sportswear.

“The Hincapie brand is truly a family story,” says Taylor Vandiver, Creative Director at Hincapie. “In addition to Rich and George running the business with the support of their father, all of the sportswear apparel is manufactured in our factory in Medellin, Colombia, run by Rich and George’s uncle Jorge and aunt Mari.”

Sales quickly grew, and the team knew it was time to take the family business from a side project to a scalable business. That’s what led them to BigCommerce.

We were previously on a custom cart that a former employee built to integrate with our ERP, NetSuite. With a custom build, after the person who built it leaves the company, you typically lose all support for that technology –– and that’s what happened to us.

So, with our developer gone, we needed a new ecommerce platform. We knew we didn’t want another custom build due to the situation we were already in, and we also knew that we needed something that would integrate well with NetSuite.

We explored Shopify, WooCommerce and Magento, but gravitated to BigCommerce after speaking with one of its partners, Patchworks, which had developed a direct integration with NetSuite. This review from Patchworks plus the features BigCommerce offers natively, was impossible to pass up given the great price point.

Of the platforms we evaluated, BigCommerce gave us the most flexibility, combining great built-in functionality with the extensibility we wanted. We ultimately chose BigCommerce over Shopify because of the built-in functionality that’s offered, whereas with Shopify, everything is an add-on. I liked that BigCommerce built core capabilities into the platform so that I wouldn’t have to just keep buying third-party extensions like I would on Shopify.

After learning more about the platform I felt more comfortable growing our brand on BigCommerce for years to come.

We partnered with Adept Marketing for our site redesign. We were seeking a developer who could seamlessly leverage BigCommerce for our ecommerce store and blend it with a Wordpress solution for our brand’s unique offerings including our custom apparel, races and local events through our cycling society.

We are very happy with the outcome of our new site. When you navigate between the Wordpress domain and ecommerce site, the transition is seamless and feels like you’re on the same website. This model allows our brand to become more than just an apparel or events company. We’re better equipped to create experiences that our customers value, whether they’re interested in a new pair of shorts or meeting friends in their area to ride. BigCommerce’s ability to integrate with a variety of different technologies has played a significant role in creating that experience.

Since the February 2018 launch of our redesigned site, we’ve already experienced a 103% increase in unique users.

Prior to BigCommerce, our business was heavily reliant on wholesale and custom orders. We started to focus really heavily on retail and facilitated our brand being sold in a ton of bike shops. The model started to really shift to being just a web-only brand.

BigCommerce gives us a lot of flexibility in terms of pricing and the features we use for marketing. With everything out-of-the-box, our B2C site basically runs itself, which is great! Because of how easy BigCommerce is to use, we have more time to invest in our wholesale business, which also continues to grow. The more seamless the BigCommerce experience is, the more we can focus on our wholesale partnerships.

Because of how easy BigCommerce is to use, we have more time to invest in our wholesale business, which also continues to grow.Taylor Vandiver, Creative Director, shop.hincapie.com

We ultimately chose BigCommerce over Shopify because of the built-in functionality that’s offered, whereas with Shopify, everything is an add-on.
Taylor Vandiver, Creative Director, shop.hincapie.com 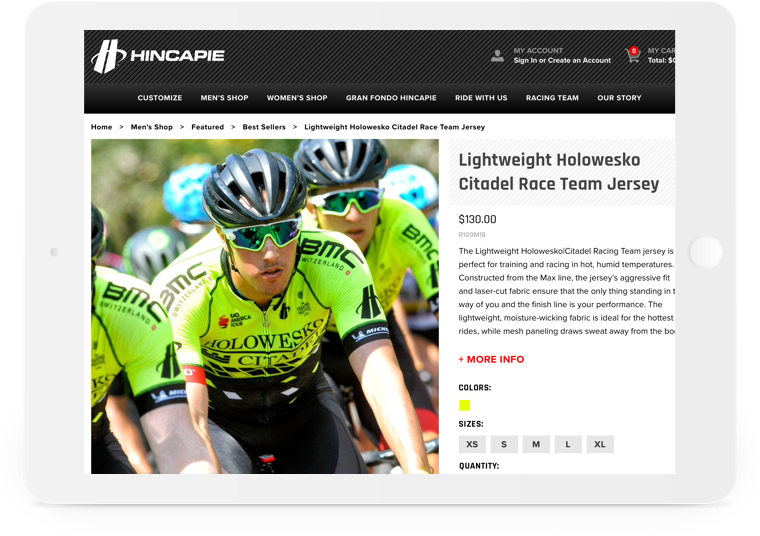 I love that BigCommerce continues to invest in its platform, rolling out regular updates. It's really important for me to see that continual development of the platform. A lot of times, I feel like SaaS solutions sell you on what it looks like on the front end, but then when you get to the back end and the management of it all, it’s really lackluster.

BigCommerce has done a lot to make sure that the platform doesn’t just look nice, but that it actually works and is always being updated to work even better, which is something I really appreciate.

BigCommerce has done a lot to make sure that the platform doesn’t just look nice, but that it actually works and is always being updated to work even better. Taylor Vandiver, Creative Director, shop.hincapie.com

See More On These Topics 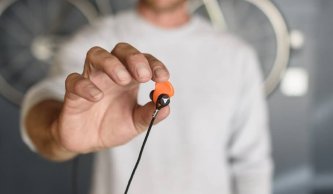 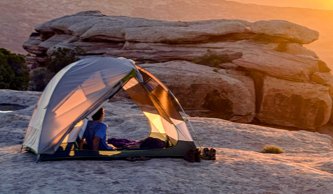 Ready to see what BigCommerce can do for your business?